An interview with Jane Grell by Kathy MacLean – DASSSA Chair

Jane Ulysses Grell was born and grew up on the Eastern Caribbean island of Dominica. Teacher, poet and storyteller in the African-Caribbean Oral Tradition, she has worked extensively with audiences of all ages and cultures in the UK and abroad. In the1990s, she was teacher-secondee to BBC School Radio, advising on its multicultural content, as well as writing and presenting.

She is a regular contributor as writer and reviewer to Scholastic publications. Her books include, for children – A New Life in Britain, Macdonald Educational; Doctor Knickerbocker and other Poems, Hawthorn Press; Mosquito Bounce, Papillote Press. For adults, Praise Songs and White River Blues, both published by Papillote Press. She has also contributed to several poetry and prose anthologies.

Jane is a member of many Dominica Associations and has taken part in the Nature Island Literary Festivals over the past five years. She has contributed books and workshops to the Roseau Library and is a member of Waitukubuli Writers.

‘My writing nestles between the shoulder blades of my Dominican heritage.’

What sparked your initial love of poetry?

I suppose I have been interested in poetry long before I knew what poetry was. I have always loved the sound and the rhythm of words – words communicating caring and sharing, for instance when a neighbour would call out from her open window to : “Ma Tibo, I have some breadfruits if you want one for your supper tonight;” or the dramatic voices of two angry women quarrelling over the attentions of some no-good man.

Growing up in a small, close knit community afforded priceless opportunities for eavesdropping; for understanding as well as misunderstanding the meaning of words, thus all the more heightening their sense of mystery and importance. There were the melodious chants and sounds of children’s laughter, floating down from over a neighbouring hamlet at the end of the school day; the songs, riddles, rhymes and rhythm games which we children enjoyed on moonlit nights. All the Nursery rhymes from our Primer readers greatly appealed to me and were recited with gusto almost as soon as I could talk. – Poetry at its simplest and most rhythmic, deeply rooted in childhood experiences, a constant well from which to draw.

How does a poem begin for you, with an idea, a form or an image?

Poems come to me in many shapes and sizes, but are often crystallised when an image fuses with an instinct or inner conviction. For example, African Dance in my children’s book, Doctor Knickerbocker and other poems by Hawthorn Press, was inspired as I observed some young African and Caribbean children, including my own, at African dance lessons in Walthamstow.

Their movements took me uncannily back to my childhood, watching adults dance the Bèlè to the beating of drums. The two dances were so similar and of course they would be, as those grownups back in the village were performing to the self- same rhythms of their enslaved ancestors. The poem came effortlessly once I had made that connection:

made manifest in the gift of the dance’

I would say that my poems are sensuous; I feel I have succeeded with a poem if the reader can hear, see, smell, feel as well as imagine the message of the words. In addition, my inner landscape, steeped in memory and pain, provides rich soil for the conception of poems.

How does your Dominican heritage influence your writing?

My writing nestles between the shoulder blades of my Dominican heritage. Even when writing about things English, in the usually complaining voice of the tropical migrant, rain for example:

does come to body-pop against my window

My short stories too are mostly all inspired by day to day life, growing up in the village of Delices, and later in the town of Roseau where I attended High School.

Which poets do you most admire and why? Which have been most influential in your development?

Throughout my early Education, like all of my contemporaries, I had scant access to the works of Caribbean and African heritage poets, so of course I was greatly influenced by English poets to whom I was presented in High School. In addition to Shakespeare I was moved by the Romantic poets, John Keats in particular, for his lyricism and certainly for the depth of melancholy in his work.

When I later discovered Caribbean writers, it felt as if I had been invited to a banquet, albeit belatedly so. I feasted on the short stories and novels of George Lamming, VS Naipaul, Edgar Mittleholzer; poets such as Edward Kamau Brathwaite, Paul Keens-Douglas, Frank Collymore spoke with familiar, resonant voices. But my greatest inspiration has to be Louise Bennett.

In my opinion, she is the quintessential embodiment of our Oral Tradition. Her poems and songs speak of the uneasy relationships forged when Africa met the Caribbean via Europe. Those relationships have to be carefully negotiated, perhaps today more than ever, when we are preoccupied with issues of identity and of who we are. Although she advises compromise, she is unequivocal about Caribbeans embracing our “mix-up” selves where our language and culture are concerned.

Thanks to Miss Lou and the Nation Language poets, our Creole languages cease to be regarded as “broken”- not broken French, broken English, Dutch, Spanish, but a rich medley combining African syntax and spirit with European vocabulary. Yes, Creole, a language conceived in the minds and mouths of enslaved peoples and their descendants, when their West African languages were squashed. – a vibrant testament to their creativity and resilience, their determination and ability to survive against the harshest odds. If this is not achievement to be proud of, I don’t know what is.

Do you have a particular audience in mind when you write?

I write for telling and I write for all ages. As a storyteller, I find it as easy to relate to three year olds as to eighty year olds. I think it’s a matter of painting pictures that my audience, in its mind’s eye can see and relate to. Again, that stems from the storytelling-by-moonlight of my childhood.

In a village without electricity in the fifties, tropical night would descend thick and fast at about six o’clock, enveloping everything in a cloak of velvet darkness. Frogs, crickets and cicadas took this as a cue to start up a shrill dusk chorus, noisy and persistent, lasting throughout the night. Millions of shimmering fireflies would also come alive, performing their hypnotic dance in accompaniment to the music of the insects. Humans, however, had other ideas. Without bright lights to lessen the gloom, they would go to bed rather early, soon after sunset, in fact.

When there was moonlight, however, now that was a different story. The village, bathed all over in pale fluorescent light would come alive with human activity and would stay awake till long after sundown. Everyone, young and old, enjoyed an extra hour or two before bedtime, in relaxed and jovial mood. While the grownups chatted or told stories, squatting on doorsteps, perched on logs or benches in the yard, or lounged in easy chairs on the veranda, the children played hide-and-seek and various clapping and ring games which I remember as moonlight games.

As a teacher, I am always conscious that children require models to encourage their own writing. Through my books Doctor Knickerbocker and other poems and Mosquito Bounce, my most recent collection, while using the call and response elements, proverbs and riddles of the oral tradition, the subjects are age appropriate.

In Mosquito Bounce for ages 4 to 12, young children on a bus can confidently confront from the safety of their top deck, perils such as an approaching raft of hungry crocodiles sharpening their teeth, or a giant in his dressing gown roaming their town.

In the poem ‘Voice from the Ghetto’ a pre-adolescent learns to hoodwink the drug pusher and the knife wielder, in order to shut his flimsy door on violence and swaddle himself in the mantle of love, which every so often flickers in his grandmother’s weary eyes. ‘African Dance’ is a poem ostensibly describing a children’s activity but geared towards adults, tasked with the responsibility of passing down a cultural baton.

Do you follow a regular process in creating your poetry? Do you draft your poems?

Writing down the first draft of a poem, always with pen on paper, is the easy bit. The redrafting on the computer can on go on for ages; months, sometimes. Some poems sit slowly percolating somewhere in my head before finally being hatched on paper.

How would you describe your poetry? What is the relationship between your speaking voice and your written voice?

I would say that my poetry is conversational, telling little snippets of stories which make up life. It is highly autobiographical, since many of my subjects are drawn from my own life experiences. Hence my writing voice and speaking voice are intertwined. Sitting on the page, of course it can be read silently, but my written work certainly lends itself to being read aloud.

In the present day world of celebrity, when it comes to being published or attaining success through writing, it’s a case of who you know and how marketable and trendy you are. My retiring nature and social media invisibility are no help. Depending on others to promote you yields poor dividends, especially if you are as backward as I am in coming forwards. When I was advised to send one of my books to a well-known Black publisher for a comment or review, she told me that she had enjoyed the poems, but her only other comment was that Black books don’t sell. She is right, of course.

What advice would you give to aspiring poets?

To an aspiring writer I would say, write because you want to; write because you feel driven to. Write above all, because you enjoy it and if perchance something which you’ve written happens to be appreciated or enjoyed by at a handful of people, then it will have been worth the effort. 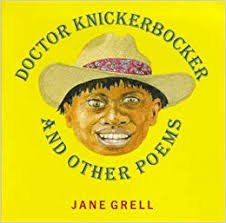 Jane’s books are available for purchase if you contact her via her website : www.janegrellstoryteller.com or directly by email : janeugrell@hotmail.co.uk.

Praise Songs and Mosquito Bounce are also available as a CD